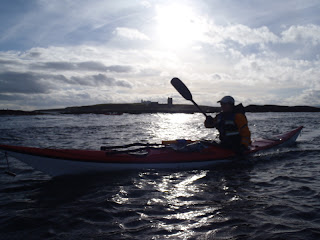 As previously publicised, this years UK Storm Gathering was held in Northumberland near Berwick Upon Tweed. The event was organised and hosted by Ollie Jay of Active4 Seasons with a strong yet eclectic supporting cast. The intention of the event, by way of guided trips, was to showcase the fantastic Berwickshire and North Northumberland coastline, which is classed as an area of outstanding beauty. 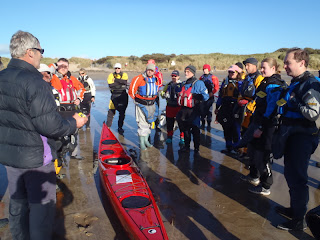 Despite the strong winds and at times heavy rains on Friday, Saturday dawned with a clear fresh outlook as folk began to rise from their various modes of accommodation at the Pot A Doodle Do Wigwam Village, Borewell. As participants and leaders gathered round the breakfast table it was good to see some familiar faces in attendance from both sides of the fence, past Storm Gathering attendees and guides alike. Justine Curgenven and Barry Shaw had come up the day before to explore the area, as had Aled Williams of Tiderace Sea Kayaks. Holding court at the table in his own inimitable way was Jim Krawiecki, who had been paying tribute to Bacchus the night before and was feeling very philosophical as a consequence the morning after. 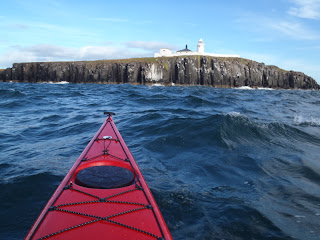 The plan for Saturday was to head out to the Farne Islands which lie two to three miles off the coast midway between the fishing village of Seahouses and the magnificent Bamburgh Castle. The Farnes are home to numerous nesting sea birds as well as as large colonies of Atlantic and Grey seals. Two groups launched from Beadnell Harbour, with one travelling out via Crumstone and on to Longstone island whilst the group I was with went along the coast before crossing to Inner Farne. 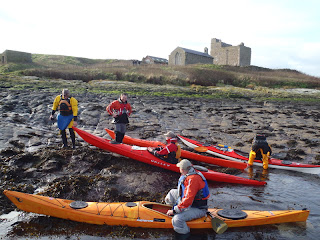 On the journey out we saw numerous Eider ducks, or Cuddy ducks so named after St Cuthbert who lived on the island and imposed a law protecting all the birds but in particular the Eider. This may have been the first ever bird protection policy, created in 676 AD. The group enjoyed moderate paddling conditions for most of the outbound leg but a welcome break was nonetheless taken on Inner Farne and folk took advantage of visiting St Cuthbert's Chapel and the Victorian lighthouse.

From here the group made its way across Staple Sound where we received numerous visits from curious seals. After taking time to enjoy playing in the swell found in the various channels between Brownsman and Longstone Islands, the group landed for a brief stretching of legs under the lighthouse. A point of interest being that Longstone Lighthouse was built in 1825 and lived in until 1990 when it became automated.  It was from here that Grace Darling and her father set out to rescue the survivors of a wrecked paddle-steamer, the Forfarshire, when it ran aground on a nearby islet in 1838. Longstone is now owned by the National Trust, but managed by Trinity House. 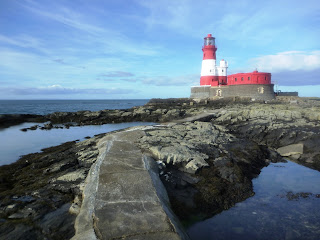 The journey home took us via the Pinnacles which looked particularly impressive as they were awash with swell and white foaming water. This was clearly an opportunity for Ollie to demonstrate his intimate knowledge of this feature by negotiating the raging seas as that roared through the passage between the Pinnacles and Staple Island. The day finished at St Aidan's Beach just outside Seahouses where everyone delighted in playing in the surf under the setting Sun. 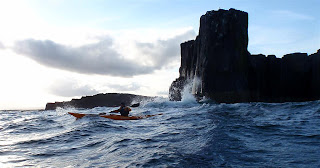 That night saw everyone congregate at the nearby the 'Barn at Beal' centre for evening entertainment curtousy of that master raconteur and pompatus of wit Jim Krawiecki. His slide show was a mixture of pub quiz, educational tour and quite promotion of his impending guide for the North of England which will be published in 2011 by Pesda Press. The audience was also treated to samples of Lindisfarne Mead, locally made cheese and steaming bowlfuls of hot stew. However, the evening did not stop there and for some it went on long into the night as guides and participants alike engaged in jolly japery and daring do. 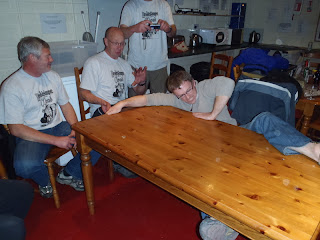 Sunday morning brought another cold start and after discussions the decision was made to  travel up  along the coast between Berwick-upon-Tweed and the Scottish town of Eyemouth. Whilst shuttles were set in the place for the end of the day, some folk took advantage of the last remaining surf at Berwick. After which symposium attendees set of on mass to enjoy a myriad of rockhopping challenges and cave exploration. 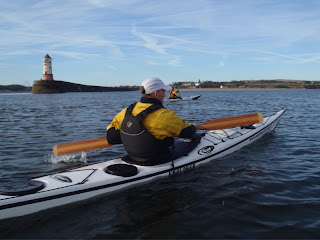 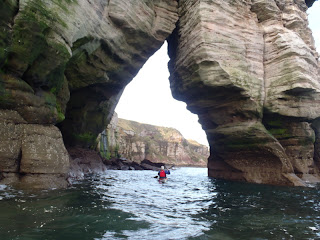 Our lunch stop was Marshall Meadows Bay which is a huge sandstone amphitheatre. Part way up one of the cliffs there is an inclined tunnel that leads to the caravan site that overlooks the area with panoramic views along the coast. 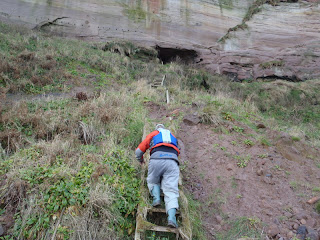 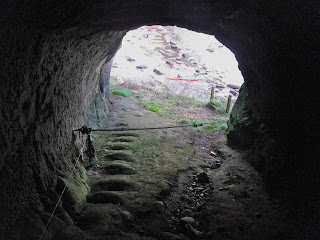 Further on up the coast, we made our way between, behind and sometimes beneath rocks all the way to Eyemouth. All too soon the gathering was over. Many were saying their goodbyes here whilst packing up kit in the descending evening cool before heading off home. 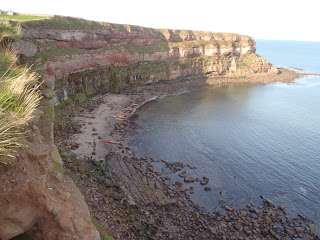 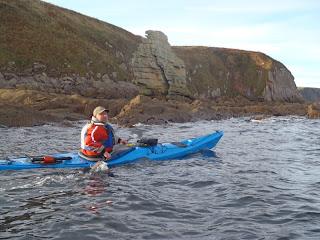 Over the weekend I took the opportunity to take the new Tiderace Extreme on the water. This a boat with a pronounced rocker and very low deck profile in comparison to the other members of the Tiderace fleet. It felt dynamic to paddle and responded well in the surf and swell. Aled set himself the design remit of a boat for big water play and the consensus was he had achieved just that. 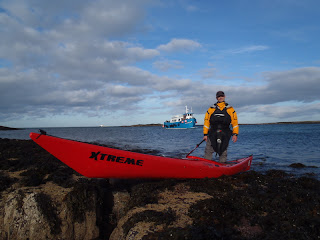 Also on this trip, I had brought along  a number of sets of Mitchell paddles supplied by Peter Baars of Summit to Sea on Anglesey. On the Saturday I used a set of Eclipse paddles with a straight shaft and on the Sunday a set of Bomboras also with a straight shaft. In this instance, both paddles where adjusted using the Varihand 'Quiklok' connector. Having used Mitchell Archipelagos for over four years now, it was good to try other blade shapes and sizes. As one might expect the construction and performance of the paddles are of a high standard, confirming for me that I prefer a large powerful blade and straight as opposed to cranked shaft. 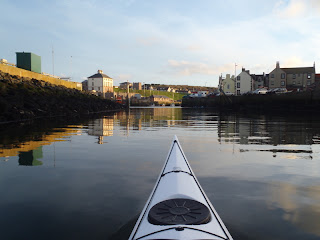 My wish is that the events go from strength to strength, as I have the firm belief that there is a place for such a symposium at this time of year. Ollie did a great job of bringing folk together, as well as providing some interesting souvenirs and entertainment. Role on UK SG 6 which I hope will be run in Pembroke in 2011, so watch this space. 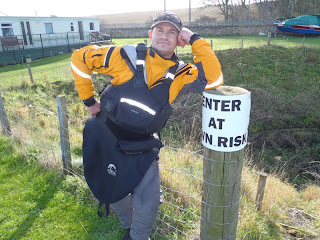 More pictures from the event can be found here. 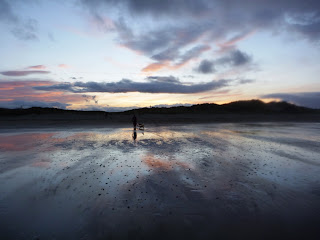