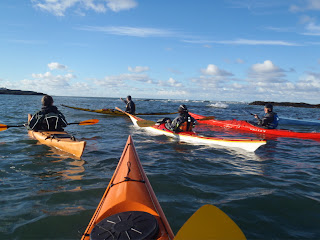 This weekend saw me on the water with Erik and Colin who where being assessed for their BCU 4* Sea Award. What was particularly enjoyable about this course was that it had been organised by Nick Cunliffe, and I was fulfilling the duties of second assessor. In practical terms, this meant I could focus on the task in hand without worrying about the paperwork. Another noteworthy point was that Erik had come over especially from Denmark to complete this course as a means of personal progression, and seemed particularly taken by the tidal waters of Anglesey. 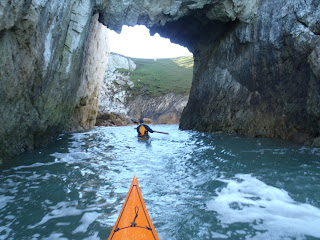 The team had spent the first day paddling from Sandy Bay on the East coast up to Ynys y Fydlyn, near Church Bay, where their personal skills were assessed by Nick. So for contrast, and because the coastline lends itself so well to this level of assessment, Erik and Colin along with a small team from Snowdonia Canoe Club whom they were leading chose to launch from Trearddur Bay and head out to Rhoscolyn and back. 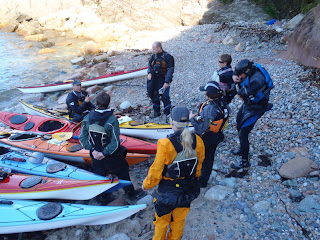 With clement conditions by comparison to the previous day and in fact the preceding weekend, the two candidates where able to negotiate an interesting route for the group, not all of whom had experienced going through the White (Bwa Gwtn) and Black (Bwa Du) Arches. Tidal conditions where also favourable for almost continuous rock hopping to Borthwen from Rhoscolyn Head including some tight passageways usually reserved for the very brave or very foolish sea paddler. 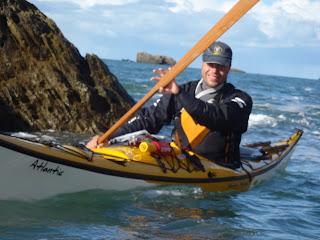 The weather seemed to hang in the balance for most of the day, with large cumulonimbus forming over Snowdonia threatening to bring rain our way. Yet despite the North Easterly F4, the paddlers seemed to fair well and the clouds merely added to the dramatic autumn light. So after a pleasant lunch break in the confines of the beach at Borthwen, Erik and Colin took the team out to Rhoscolyn Beacon. 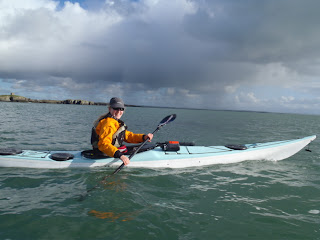 As one might expect after taking a rest on the beach in the warming sun, paddlers can become soporific and make mistakes or even become fatigued form eating too many treats. So it was that the candidates began facing an number of issues including a group member who had lost a day hatch. Another with a blister and yet another who became sea sick. All of which are very real things that can happen on a trip, though not always in quick succession, requiring Erik and Colin to deal with the problems as well as coordinate the other paddlers not directly involved. 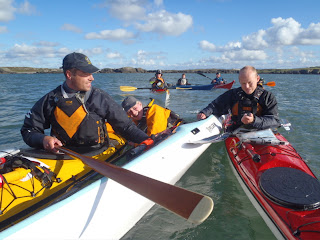 One issue that did arise, which was not contrived by me in anyway, saw the toggles of two rafted boats get locked together. Somehow, perhaps through wave action, the bow toggle of one boat that normally hangs down had looped over the stern toggle of another boat which is normally secured uppermost by an elastic. Now in this situation it was easily resolvable through the intervention of a third party but it may well have been a different matter had it just been a pair of paddlers on their own who had rafted up for a chat. Solutions on a postcard! 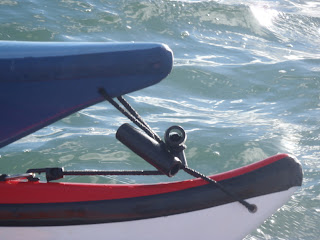 On this occasion, I had the opportunity to try out some Mitchell Bombora paddles with a cranked shaft. These had been kindly supplied to me by Pete Baars of Summit to Sea on Anglesey. It has been some time since I paddled with cranks and I found these to be comfortable, achieving a powerful catch as well as an allowance for fine tuning via the Vario S Lock system. Alongside this, I was also putting a pair of Kokatat Tempest Pants through their paces. These are paddling trousers with dry socks, worn with a pair of Kokatat Seekers to protect them. The trousers are high waisted and accommodating using a neoprene cummerbund with velcro tabs for adjustment. The integral socks makes for a very warm and dry foot experience with the Seekers offering sturdy covering in the form of a low profile shoe. A highly recommended combination for autumn paddling without the need to break out the dry suit. 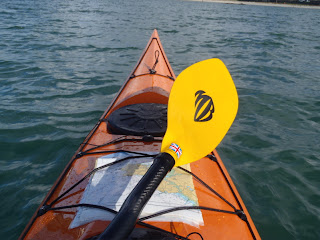 So once the team had safely landed and all the necessary 'thanks yous' and 'goodbyes' had been said with the team from Snowdonia Canoe Club as well as having the obligatory ice cream, the assessment team and candidates retired to the Trearddur Bay Hotel. Nick and I took the opportunity to debrief Erik and Colin of their progress over the two days. On this occasion both of them had been successful so hearty handshakes and 'well dones' where exchanged, and it was nice to be able to direct them towards bigger and more challenging horizons for the future also. 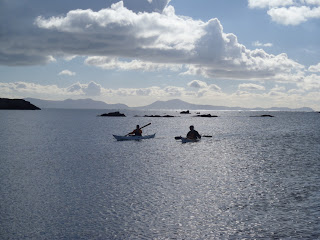 Get in touch if you are interested in completing a similar assessment course or just wish to look at your skills development in a boat.

More pictures of this course available here
Posted by Sea Kayak Mark at 2:39 AM