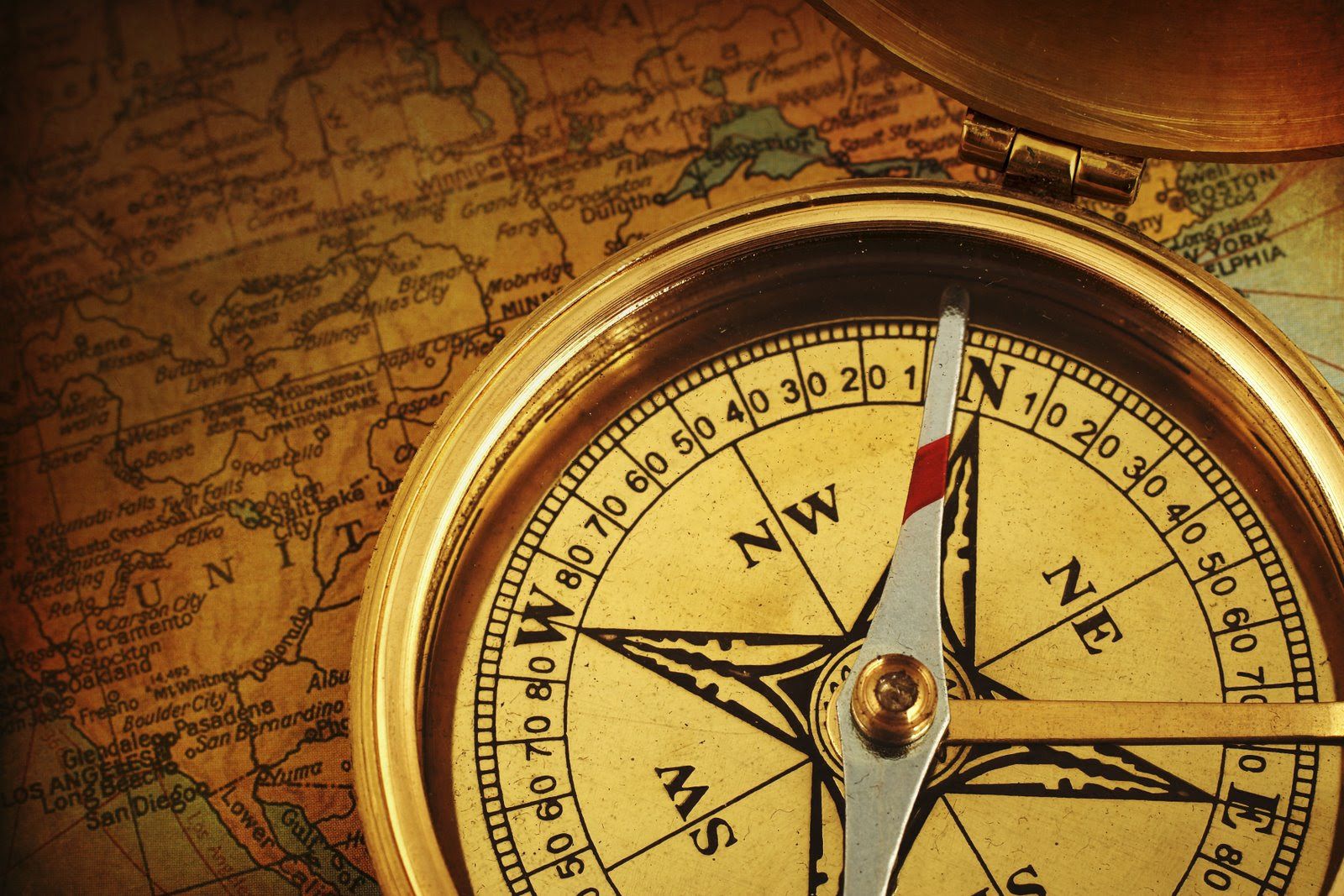 When sea kayaking, we often need to work out how long it will take to paddle a set distance as part of our trip planning, or when we need to change our plan during the journey. Assuming that we are not affected by wind or tide we can use the following quick calculation which is easy even when underway. 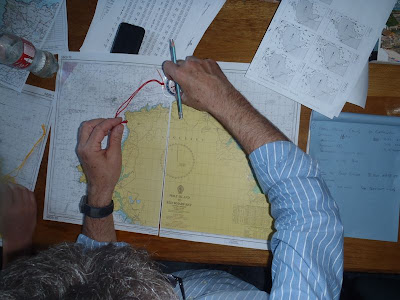 Remember, these calculations are for the average sea kayaker who paddles at approximately 3 knots (3 Nm/hour). You should check your own speed before applying the following formula. On your chart or map, measure the distance you are going to paddle. Take this measurement and multiply it by 2, then multiply this figure by 10 to give the number of minutes it will take to reach your destination. 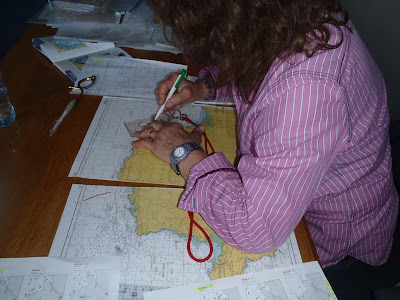 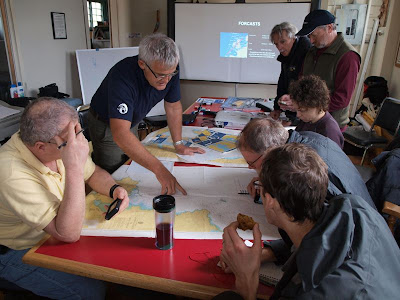 Sea kayak navigation can seem complicated at first, but there are plenty of quick tricks like this which make the mental arithmetic very easy. You can learn many of these by enrolling on a BCU Coastal Navigation and Tidal Planning course with Greenland or Bust. 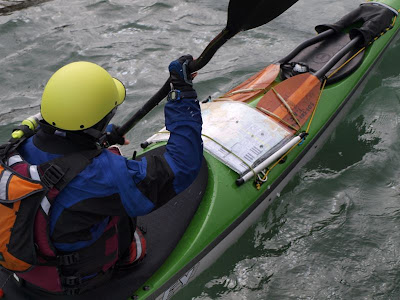 The aim of this one-day classroom based program is to give participants the necessary tools to plan and navigate effectively on coastal journeys in moderate ocean conditions. Upon completion, each student should have planned at least two coastal journeys that they can take home as reference for further personal trip planning. This course is designed to compliment areas covered in the BCU 4 Star Sea Award training and is a prerequisite for assessment.
Get in touch if you are interested in completing a similar training course or just wish to look at your skills development in a boat.
Posted by Sea Kayak Mark at 11:22 AM 1 comment:

Simplifying the Roll with Helen Wilson 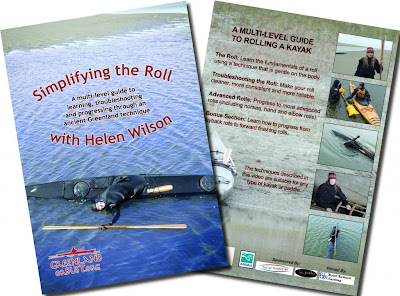 This is a preview of the DVD: Simplifying the Roll with Helen Wilson. A multi-level guide to learning, troubleshooting and progressing through an ancient Greenland technique. You can order this at Greenland or Bust It was filmed by Bryant Burkhardt Kayaking.

For DVD Trade or Dealer inquires in the U.S. contact Active Paddles

For DVD Trade or Dealer inquires in Canada, visit  Joe O’ Paddles
Posted by Sea Kayak Mark at 4:47 AM No comments:

G or B Upcoming Events & Programs 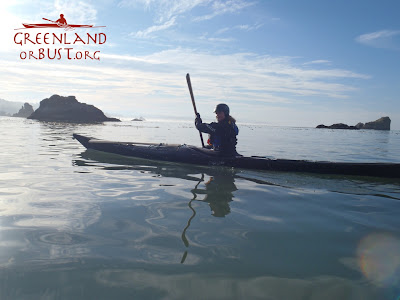 Visit the website for our current event attendance and scheduled programs in 2011 and 2012, with more to be added soon - www.greenlandorbust.org.
Posted by Sea Kayak Mark at 4:32 AM No comments:

Following on from the traditions of coastal Scandinavian fishing communities, Storm Gatherings have become a means for like-minded people to get together and celebrate a fruitful and rewarding summer on the water with some excellent paddling in often challenging conditions and unparalleled entertainment in the evenings before the long winter nights take hold.

The 6th UK Storm Gathering took place on Anglesey in October, and was followed by BCU Week that included both BCU 4 and 5 star trainings and assessment courses. The weather was true to form and kicked up a fuss with southerly Force 6 winds building to Gale 8 in preparation for the weekend. Undeterred, however, 90 paddlers from across the UK and Europe including participants from Switzerland, Sicily, Sweden, Norway, Finland, Denmark and Sweden converged on Anglesey Outdoors for an action-packed symposium.

The coaching team was also expansive in terms of nationalities and experience. Helen Wilson, Paul Kuthe and Warren Parker from the US along with Axel Schoevers from Holland joined the likes of Jeff Allen, Justine Curgenven, Steve Graham, Ollie Jay, James Stevenson and Phil Clegg in providing some excellent on the water workshops. A special mention goes to Nick Cunliffe, who tackled the tremendously difficult task of coordinating participants and coaches each morning based on some very exciting sea conditions.

Locations such as Rhosneigr, Trearddur Bay, Penmon, Bull Bay, the Menai Straits and even Llyn Padarn where used for a variety of workshops including incident management, open water rolling, rough water handling and surfing amongst. Participants were stretched and challenged, but tired smiles and laughter over a beer in the Paddler’s Return suggested that the event was living up to expectations. Paddlers were clearly thrilled that they had faced conditions that they would not normally have gone out in.

Each evening was filled with activities and entertainment too. Friday night saw Jim Krawiecki, with the help of Barry Shaw, Kate Duffus, Andy Morgan and Roger Chandler presented a series of short films and slideshows to get people in the mood as they arrived. Nick Cunliffe and Matt Giblin put on a sea kayakers pub quiz on Saturday night that combined elements of a celebrity quiz show, trivia rounds and various embarrassing party games. Sunday night had everyone gather at Rhoscolyn School to hear Jeff Allen present ‘Into The Wind’, the epic account of a record breaking circumnavigation of Ireland he completed with Harry Whelan earlier this year.

A tremendous thanks go to Kokatat, Tahne Marine and Tiderace Sea Kayaks for supporting the event in a numbers of ways including raffle prizes, demo boats and promotional services. Appreciation also goes out to Joe O’ Paddles, the Fat Paddler, Mitchell Blades and Bluewater Kayak Works for donating some wonderful prizes to the raffle also.

Overall, it was great to see everyone getting stuck in and relishing the opportunity to experience some really rough water. The UK Storm Gathering symposiums are gradually becoming the event to attend for anyone looking to paddle in some amazingly dynamic waters in the company of some superb coaches. See you all on the water again soon. 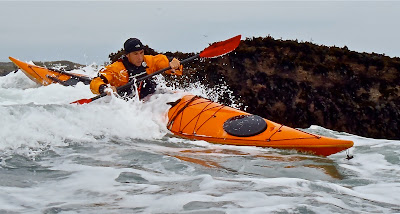 The following guest coaches and participants have shared their thoughts and perspectives on the 6th UK Storm Gathering. Have a read and maybe get inspired to come along next time :o)
Helen Wilson
Francesco Petralia
Justine Curgenven
Jim Krawiecki
Paul Kuthe
Roger Chandler
Axel Schoevers 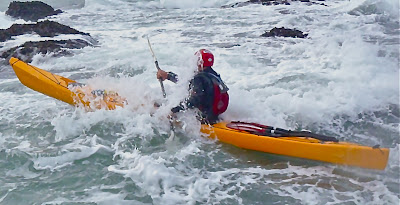 Photos by Paul Kuthe
Posted by Sea Kayak Mark at 5:20 AM No comments: