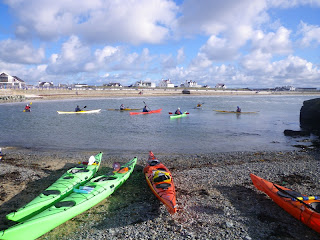 Last weekend was my penultimate BCU Level 3 Coach (Sea) assessment as a course provider in the current scheme. As previously mentioned, after the December 2010, the award as we know it will no longer exist and will be replaced in part by the Moderate Water Endorsement. 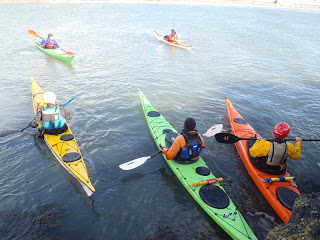 With Dave Evans on hand as my second assessor, 6 candidates joined us in Trearddur Bay on Saturday morning along with a group of trusty volunteers from Snowdonia Canoe Club who would be acting as students for the team. Simon, Debbie, James, Meaghan, Peter and Joy had travelled from near and far to present themselves as prepared and proficient coaches, brimming with energy and enthusiasm ready to teach and lead. In the case of Meaghan, she had come a very long way to sit this assessment...Vancouver to be precise. 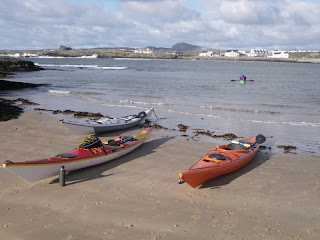 After dividing up the candidates amongst the two us, Dave and I set about watching the coaches in action as they employed a number of skills and strategies to improve and encourage their students. It is always a fascinating study of human behaviour as one observes each coach goes through well rehearsed routines and see them deliver effective learning episodes. The reason I say fascinating is because no matter how supportive and open an assessment team try to be, individuals can still put themselves under tremendous personal pressure even when they are doing a good job. 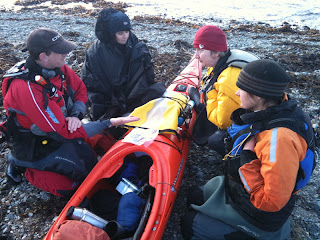 On this occasion the coaches where confined somewhat to the inner sanctum of Trearddur Bay as a strong swell was still present in Penrhos Bay. However, this didn't prevent them for offering up some exemplary on the water sessions, along with interesting and interactive beach based presentations on subjects such as tides, equipment and shore ecology. 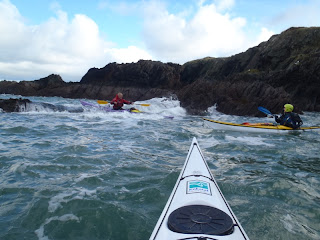 Sunday saw us relocate for to the north coast, launching from Bull Bay and heading on a westerly course towards Porth Wen Brickworks. As each candidate took turns to lead the group they faced a number of issues, as one might expect on assessment. It is often easy to exploit an opportunity and turn it into an incident, especially when a coach turns their back on a group member. For instance, as someone explores a cave with heavy swell present, it is almost guaranteed they will take a swim. However, it is important not to create too many artificial situations and sometimes it is easier to see people perform towing duties and deep water rescues by simply asking them too. 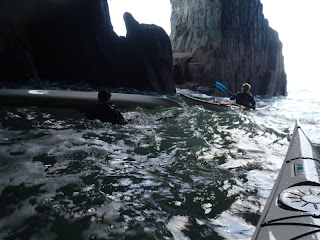 One of the great pleasures of working with Dave Evans is that he is a consummate professional and highly knowledgeable on matters of seamanship. He also has a knack of testing and probing what candidates know in novel yet constructive ways. So it was while the candidates showed us the equipment they were carrying and justifying the reasons, Dave was hatching one of his group quizzes. As expected, the candidates took to the task and even enjoyed the humour of the situation as they both answered and asked questions on matter relating to the sea. 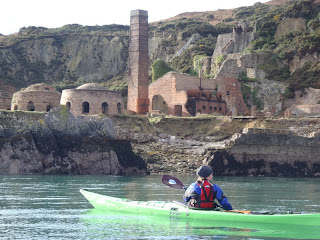 After the pleasant break at Porth Wen, the return journey continued in the same vein as before. And perhaps because Dave and I are traditionalists or maybe because this was the penultimate course, the assessment finished with an 'all-in' rescue with a cry of 'thank heaven for drysuits' from the swimming coaches. Once all were safely ashore, Dave and I took time to reflect and deliberate on the performance of each candidate. On this occasion it is pleasing to report we were both in full agreement that all the candidates should move forward to being Level 3 Sea coach. Well done one and all :o) 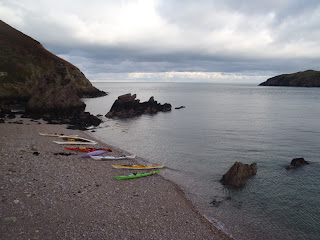 Get in touch if you are interested in completing a similar assessment course or just wish to look at your skills development in a boat.
More pictures of this course available here
Posted by Sea Kayak Mark at 4:45 PM