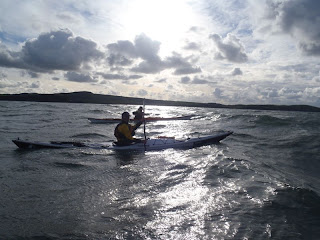 The last stage of the Level 5 process that I need to complete is that of becoming a BCU 5* Sea course provider. This requires me to undergo a period of observation amongst my peers and second staffing a number of courses until I am deemed suitably knowledgeable in the delivery of both training and assessment dimensions. On this occasion I was fortunate enough to have been invited along by my good friend Nick Cunliffe and was given the chance to watch the likes of Dave Brown and Olly Sanders on the water in full assessor mode. 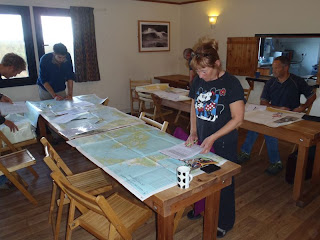 For those who don't know, the BCU 5 Star award is conferred upon those individuals who are extremely competent leaders and highly skilled paddlers within a particular discipline.  They able to lead groups in advanced conditions and are familiar with the relevant safety and rescue techniques for that environment and discipline. The award is available for white water, canoe, sea and surf. 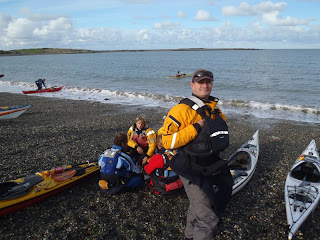 Saturday morning saw eight candidates from across the UK and Europe gather at Anglesey Outdoors for what would be a very intense couple of days. Nick settled the aspirant 5* leaders down with a calming introduction before setting them their first task which was to plan a significant open water crossing. This allowed the assessment team to discuss the plan for the rest of the day, and address a number of emergent issues. Namely, who gets to have me as their shadow and was there time for more tea before the candidates finished their trip plans. 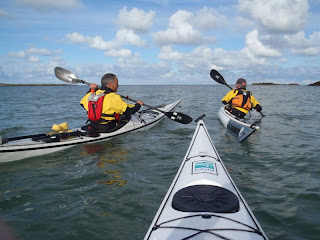 It is worth noting at this point that the 5* is set out as being the appropriate test for paddlers who wish to lead groups of other paddlers in appropriate locations in advanced tidal waters and in dynamic weather conditions typified by the climate of the British Isles. The idea being that a 5* leader has the skills and judgement to select appropriate trips for a range of ability levels, though it is not a coaching award and is considered not to be a suitable mean of introducing beginners to the sport. It is no wonder then that the 5* is coveted amongst those paddlers who are successful because of the sheer hard work and lengthy preparatory steps required to get to this stage. 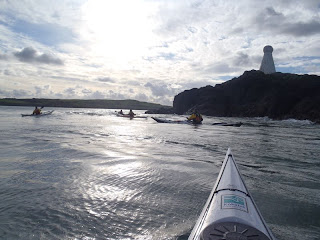 So with the first task completed, the candidates gathered again to be briefed on the rest of the day. The intention being that two pods of four plus assessors would launch from somewhere on the north coast and make use of the prevailing conditions and tides. With a north-westerly force 5 and a spring ebb, everything was in place for the teams to take on one of the classic advanced trips in North Wales, that being out to the Skerries which sit off the main Anglesey coastline near Carmel Head. 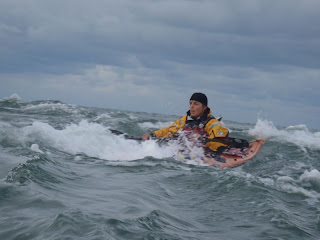 To that end, 4 candidates along with Dave and myself set of from Cemlyn Bay with the intention of visiting the Skerries, whilst making the most of what the sea had to offer along the way. The outward journey gave rise to opportunities for each paddler to be tested as a leader with regards group management and navigational ability, as well as having their personal skills put under scrutiny. West Mouse offered an appropriate haven for questioning candidates on matters of chart work, whilst the surrounding overfalls offered suitable conditions for a number of personal challenges including rolling and self-rescues. 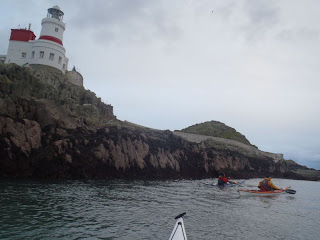 However, things were far from over and the team set off to complete the next leg of the voyage, which was to get to the Skerries themselves. This was done with enough time to enjoy the last light of day and listen to the seals snort and roar as everyone ate as much as they comfortably could knowing the return journey might be an arduous one. And so it was, as the team launched in the hope of enjoying a flooding tide that would return them to Cemlyn in the dark. Each candidate being aware that their skills of navigation were of paramount importance to ensure the correct course to steer was taken. To further complicate matters, the weather brought with it stinging cold rain that later fell on the hills as snow. Nevertheless, after several navigational stages and relocation exercises, the team paddled wearily back into the bay happy in the knowledge that, for now, the assessment was over till the morning. 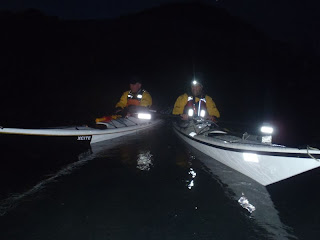 Sunday dawned bright, and despite the long night, the candidates faced the new day with vigour and humour. Most claiming that they had slept soundly and were fully prepared for what they might face next. The candidates were divided in to three groups on this occasion, of which I followed one under the mentoring presence of Olly Sanders. This day also saw the aspirant 5* leaders take charge of a small group of paddlers. Most of whom were local club paddlers who had volunteered their time to be lead, and perhaps gain an insight into the 5* process. 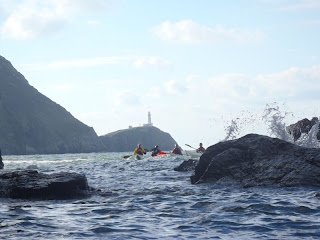 Each team set of from Porth Dafarch with the intention of making use of conditions at Penrhyn Mawr, North Stack and South Stack. It gave the would-be leaders a chance to guide and manage some very real people in their care. The autumn light on the cliffs was impressive as we approach Castell Helen and then South Stack. What was even more impressive were the climbing team about to ascend Lighthouse Arete despite the chilly conditions. With that distraction aside, we continued on past South Stack and eventually came to play in the overfalls at North Stack. This came after a brief floating lunch stop as landing at Parliament House Cave was avoided due a seal and her pup being in residence. 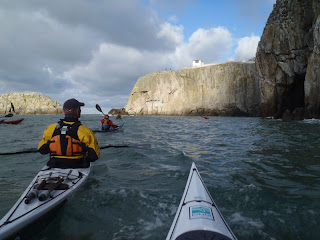 The day continued from here with each candidate facing a number of issues and incidents to take care of including group members with suffering with ill health or broken equipment or both. The process of questioning and the tasks set out were both fair and reasonable considering the level of the award. The trip itself was very enjoyable having taken in the most popular tide races and overfalls Anglesey has to offer. Certainly South Stack provided everyone with a few moments of personal surfing thrills on the return to base. 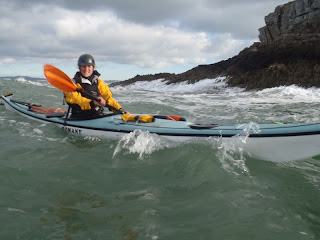 I gained a tremendous amount from seeing my peers in action and discussing their perspectives about the 5* process as they view it through a particular lens. Having previously delivered on a 5* training course, observing the assessment helped me set out the full picture in my own mind as to not only what should be expected of the candidate burt also the obligations incumbent upon any trainer as they set aspirant leaders on this particular path. On this occasion not everyone was successful and at times like these the assessment staff take as long as is practical to explain the reasons why and set out clear actions plans for improvement. The hope being the right guidance will give the candidate renewed impetus to come back stronger and better next time. 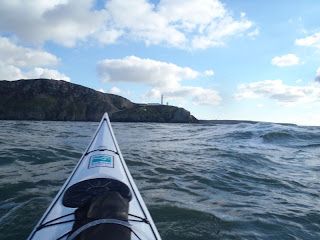 The BCU 5* award is an ideal benchmark for those paddlers who journey on the sea in areas where tidal races, headlands, open crossings, swell and challenging coastlines will be encountered. It is intended that this award is accessible to all those people who lead on the sea on a regular basis and should not be seen as the preserve of a few elite performers. It is envisaged that a committed club paddler, sea kayaking regularly in a suitable range of situations, sea areas and conditions should be able to obtain this award within a period of three years.

Get in touch if you are interested in completing a similar assessment course or just wish to look at your skills development in a boat.

That's a great article. Thanks for posting!