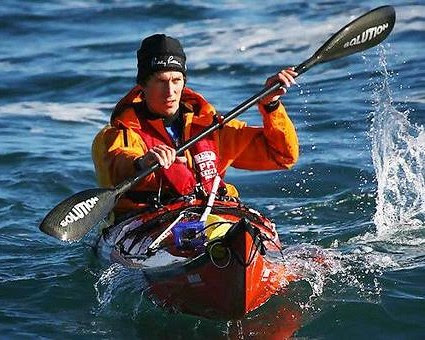 Andrew MacAuley has been lost at sea whilst attempting the first solo kayak crossing from Tasmania to New Zealand, an open crossing of 1600 km. His journey began from the east coast of Tasmania to Milford Sound located on South Island, New Zealand. The route he took is entirely below the 40th parallel (40 degrees latitude south) otherwise known as the "Roaring Forties".
Andrew commenced this impressive endeavour on January 11. This was to be his second attempt, the first having failed due to exposure from the cold fairly quickly into the launch. However, on 10th February, with approximately 75 kilometers left in order to complete his Trans-Tasman Kayak Expedition, a distress signal was received, and many hours afterwards, following a helicopter search and rescue attempt, his abandoned kayak was located reportedly in good condition.
After several days of intensive searching there has been no sign of Andrew and further efforts have been halted. Hope fades away for his family who have been holding out that he will be found alive.
Wenley and Derrick are documenting information and updates as the story unfolds of the potential demise of this brave soul. It appears the outdoor and expeditioning community has lost a friend.
A support fund has been set up by the New South Wales Sea Kayak Club to help Vicki McAuley and family following the tragic disappearance of Andrew McAuley, devoted father and loving husband.

"Man cannot discover new oceans unless he has the courage to lose sight of the shore."
(Andre Gide)

At 7.15pm NZ time on Friday 9th February, the New Zealand coastguard received an almost indecipherable transmission on channel 16 from a vessel identifying itself as 'Kayak 1' in the Fiordland. Andrew was within sight of land.

When no further communication was received, ships in the area were diverted to investigate. A full scale aerial search ensued, and Andrew's kayak was located, capsized, late the following evening approximately 30 nautical miles off the coast of New Zealand. Andrew was not found, yet his spirit will live on forever. In my mind, he achieved his goal.

Ant, you live for adventure, and you've just had the most incredible adventure this time. We were with you all the way! You have lived life to the fullest, and you'll live on in our hearts forever!

Andrew's family and support team wish to express our utmost appreciation and thanks to all those involved in the search — the New Zealand Rescue Coordination Centre, the Te Anau police, the Australian government and all the wonderful New Zealand local people who have extended their hearts and offers of help in this most difficult time. We are indebted to you all.

We are extremely proud of Andrew and will always remain so. His incredible achievements in adventuring are without parallel. Whilst being driven by the challenge of making the impossible possible, much of Andrew's motivation was also based on inspiring others to get up and have a go at exploring their own limits. He was and will continue to be an inspiration to others in their own personal endeavours.

Ant, we love you and will miss you more than words can express.