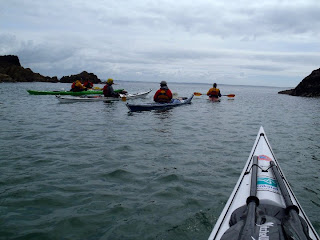 Last weekend saw me travel to Pembrokeshire to work alongside Nigel Robinson of Sea Kayak Guides in St David's on a 5* Sea Training course. I have known Nigel for some time as a BCU trainer and assessor as well as fellow symposium coach but this was the first time for us as colleagues on the water. As this course was forming part of my 5* Assessor pathway, I took the opportunity to observe Nigel closely with Jim, Kelly, Chris and Stuart who made up the candidate team. 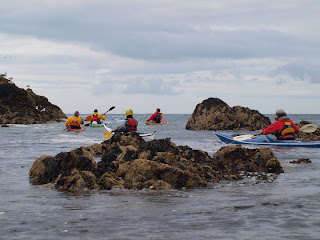 We began on Saturday morning with a session discussing the 'whys and wherefores' of the 5* sea, before Nigel set the team a planning task for the day. We chose to launch from Porthclais with the intention of not returning until well after night fall. And while the intention was not to camp out, the team was expected to paddle with boats packed for such an eventuality. Once on the water, each of the students took turns to lead the group towards Ramsey Sound, followed by an analysis of their approach to the role and their decision making processes. 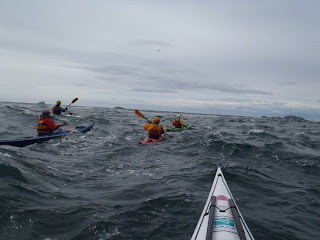 Having travelled into the Sound, we crossed over to Ramsey Island itself and took time to watch each paddler perform in the tiderace known as the Twll that forms between Ynys Cantwr  and the southern end of Ramsey. After which the group journeyed up the outside of the island, facing a number of scenarios on the way including emergency landings as well as exploring leadership principles such as  positioning and shaping a course. The day continued after a break at the harbour near Pont y Geist with the candidates then venturing into the Bitches, a notorious and popular tidal playspot. Here we explored eddyline crossings, use of contact tows, surfing and upstream progressions. 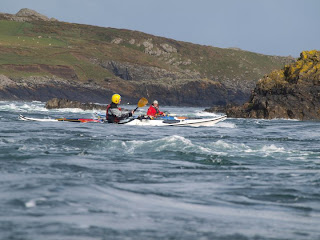 One more stop at Porthlysgi Bay had Jim, Kelly, Chris and Stuart  as well as myself and Nigel settle down for a hearty feed, swapping expedition top tips and tales of adventure on the high sea over a driftwood fire as we waited for dark. The night element of the training is used to emphasise the strategies a leader needs to employ to get a group back safely when a late return is going to occur due to delays in the day.  These include such things as numbering group members; use of glow sticks; tight group management; and navigation techniques such as aiming off, handrailing and using catchment features as well as stressing the need for accuracy in timing and judging distance to travel. 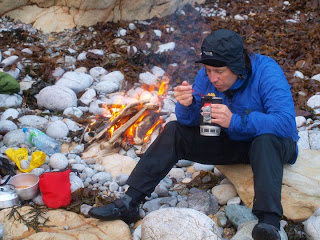 Sunday was a prompt start that had us reviewing the past 24 hours and planning once again for the day ahead. This time we set off from Porthgain with the intention of landing at Abereiddy. Though the day was moderately shorter, plenty of time was spent looking at rough water boat handling as well as personal rolling and group rescues in the nearby tideraces. As the day progressed a number of incidents occurred for each leader to deal, all requiring sensible solutions and good situational management. After lunch at Traeth Llyfn, we explored surf launches and landings, contact tows in the surf and anchored surf landings. The key tip from Nigel being double the length of your towline. The team then made its way to Abereiddy, with some simple rock hopping thrown in for good measure, and on to Nigel's for tea, tiffin and de-briefs. 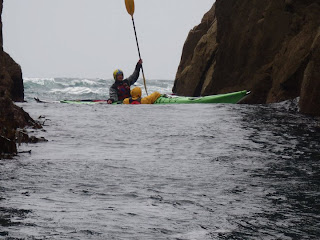 An expression that got used over the course of the training was 'Talk Loud, Talk Tough'. This was used as means of emphasising the times when a leader needs to demonstrate command over a situation by being clear and direct in their instructions when the wind is howling and waves are crashing while a capsized paddler is getting cold and soaked. Once an incident has been resolved and the whole group is back on track then the time for 'Talk Softly, Talk Kindly' may be more appropriate. 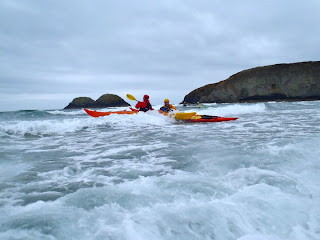 There was some discussion over the weekend that there is no such thing as an advanced skill and instead there are only the fundamentals which are performed well in a more advanced situation. Another point raised was that when looking at advanced skills we should perhaps more concerned with a paddler's state of mind. That is, how they handle themselves as much as their boat in challenging conditions. So when it comes to assessing an 'advanced leader' perhaps it is their whole demeanour, both on and off the water, that needs looking at as carefully as well as their ability to do 360° turns on a wave train. 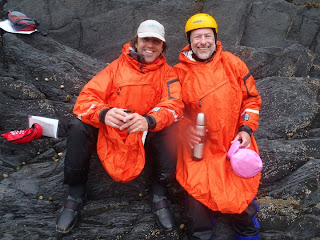 Another topic that came up was that of respect. A good 5* leader ought to show respect to, and also take responsibility for, the participants they are paddling with as well as the environment in which they operate. In addition, it was agreed that a leader should engender respect for any equipment being used as the trainees considered the 'What If's...?' facing a group of paddlers that suffers a major equipment failure, maybe on the remote side of an island, due to an individual's mistreatment of their boat and gear. 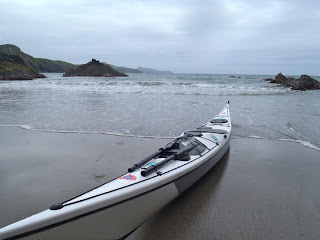 It was interesting to see how Nigel allowed matters to evolve over the duration of the course, rather than running to a set timetable. Raising issues and asking questions as opposed to being directive and enforcing hard rules or mandates. It was refreshing to be with a fellow coach who avoids gimmicks and set pieces to make a point as to how a leader should be. Instead, Nigel was very adept at introducing topics and letting discussion grow, drawing out an individual's understanding and filling in knowledge gaps both discretely and through peer contribution. 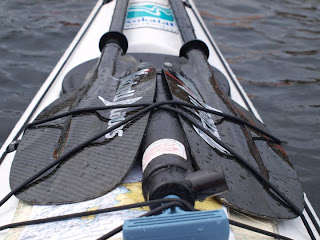 Get in touch if you are interested in completing a BCU training course or just wish to look at your skills development in a boat. 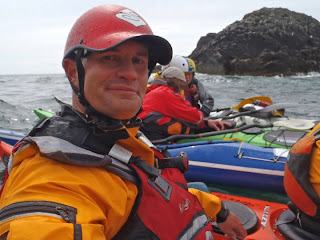 The St. David’s peninsula and the islands extend into the main tidal streams running along the E. coast of St George’s Channel. Consequently, large volumes of water are squeezed back and forth through Ramsey Sound and between the rocks and islets of the Bishops and clerks. Streams can run up to six knots, causing overfalls, strong eddies and confused seas. In addition to the main N/S streams, it is important to note that there are streams that do not conform to the general flow.

The tidal streams begin at the following times:-

The North going, flood stream runs on either side of Ramsey Island, being at its strongest in the narrows between the Bitches and Pen Dal Aderyn. Where the stream flows through the Bitches, standing waves are formed and there is an extensive area of whitewater downstream, with an eddy stream returning S. along the east coast of Ramsey. South going eddies may also be encountered on the E. side of the sound from Point St. John to Penmaenmelyn.

On the W. side of Ramsey, the North going stream runs strongly around Carreg Gwylan and Trwyn Bendro. Further offshore, at the Bishops and Clerks, the stream starts later than they do in Ramsey Sound, and run N.E. through the islets and rocks towards St. David’s Head.

When streams are running strongly standing waves extend down the length of the sound and overfalls form around Horse Rock.

The South going, ebb stream runs S.W. from St. Davids Head and between the islets of the Bishops and Clerks. The stream divides near Gwahan, one arm running through Ramsey Sound and another running W. of Ramsey Island. The stream strengthens where it flows around Trwyn Drain Du and Trwynllundain, and there are strong streams on both sides of Carreg Gwylan.

A strong N.W. going stream is known to occur off Trwyn Sion Owen at the beginning of the South going stream. On the W. side of Ramsey Sound, north-going eddies run from Ynys Cantwr to the Bitches. North going eddies form along the coast of the mainland from Porthstinian to Point St. John and an eddy stream runs N.E. into Porthmawr between Carreg-gafeilog and the mainland.

Streams run along the S. shore of the St. Davids Peninsula, between Porthclais and Pen Dal Aderyn. They are generally weak, but may run quickly around Carreg Fran and between Pen Pedol and Pen Dal Aderyn, where the W. going stream joins the main stream in Ramsey Sound.

Slack water in Ramsey Sound is, according to local knowledge 2 ½ hours after local H.W. and L.W. i.e. 3 hours after H.W. & L.W. Milford Haven. It may last about 15 minutes on neaps but is considerably shorter on springs and may sometimes appear to be non-existent.

Opinion vary as to the exact time of H.W. and slack water in the Sound. The times at which the streams begin may vary considerably from those given here

A fascinating insight, Thanks Mark. I'm currently working towards my four star & little insights like your blog post are great inspiration & a guide of what to practice...