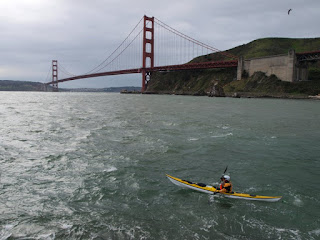 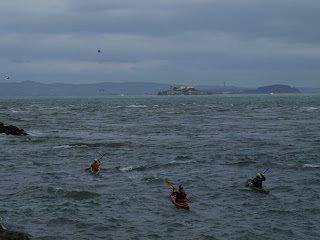 On the eve of the 3rd Golden Gate Sea Kayak Symposium based in San Francisco Bay, the mood of the Pacific Ocean was decidedly wild. With 35-40 knot winds from the south howling through the Eucalyptus trees and big swell pounding the coastline Sean Morley, who co-organized the event with Matt Palmariello, was predicting some 'interesting' conditions for the weekend ahead. 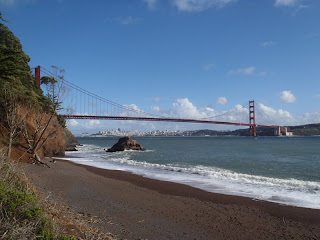 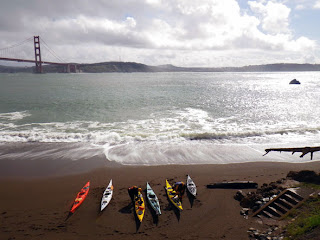 This was to be my second appearance as a guest coach at a US sea kayak event. My first being the successful Storm Gathering USA held in New York last autumn. I must admit to being somewhat awe struck by the illustrious turn out of American All-Star coaches including the likes of Helen Wilson, Ben Lawry, Rob Avery, Tom Bergh, Tom Pogson, Jeff Laxier, Duane Strosaker, Marcé Wise along with San Juan Islands-based instructors Leon Somme and Shawna Franklin, to mention just a few. Such characters as Eric Soares - longtime member of the infamous Tsunami Rangers and Reg Lake - renowned paddler and boat design innovator also joined us on the water. 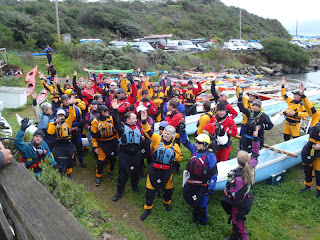 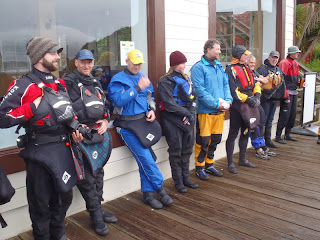 For GGSK ‘11 organizers Sean and Matt, however, assembling such a collection of paddling luminaries was only part of the equation for creating an event that focuses on skills development for intermediate and advanced paddlers in rough water conditions, not unlike the philosophy behind the UK Storm Gatherings. The other part of the equation is clearly about what the waters of San Francisco Bay can offer in terms of a healthy mix of big sea, surf beaches and rocky coastline. 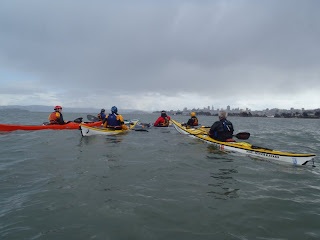 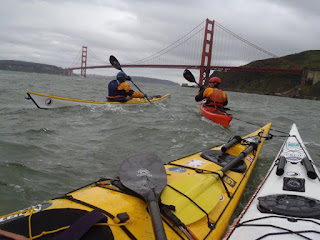 Prior to the main event, I had the opportunity to observe and work along side the somewhat legendary Nigel Dennis on a BCU 5* Sea training which was combined with an Open Water Navigation course also. Nigel is clearly a true impresario when it comes ocean kayaking anecdotes and ‘lesson learned’ from the sea, as well being highly respected as a 5* trainer on both sides of the Atlantic. He is quite erudite in expressing what he feels is the right level to be at for achieving the award, which is not about 'balls-and-brawn' in his opinion. Nigel was clear to point out that the 5* is about making the right decisions so as not to get ‘pasted’ in the first place which to him means handling moving water expertly, leading a group overtly, and having a keen sense of awareness about where to draw the line. In the end, the students had their fair share of gnarly conditions including chaotic seas on an ebbing tide beneath the Golden Gate, a couple of near misses in the surf zone, as well as a hail storm plagued night navigation session along with rescue practice and incident management. With such a master paddler as Nigel Dennis on the water, the students gained plenty of useful insights along the way. 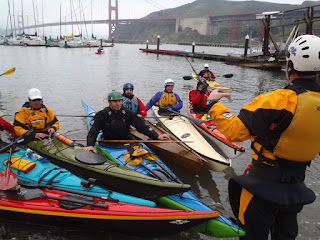 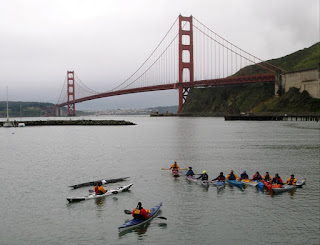 As one might expect from a symposium such as this, the weekend was brimming with workshops looking at boat handling in tides, practical navigation, rescues and incident managment as well as more wacky sounding workshops such as 'Debacle Deterence & Chaos Control'. The event was timed to coincide with a large spring tide to ramp up conditions in what is noted to be one of the strongest tidal areas on the Pacific coast. However, what the Bay may lack in terms of boisterous conditions compared our more infamous tideraces and overfalls in the UK, it makes up for other things in spades. As Sean Morley remarked “Who wouldn’t want to paddle under such an iconic structure as the Golden Gate Bridge or ride the tide past Alcatraz?”. 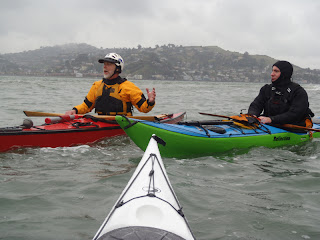 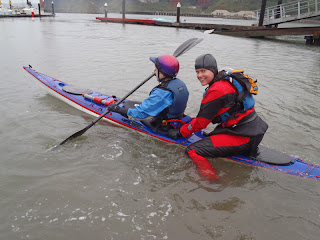 One of the great things about being a guest coach at such events is you get to work with some interesting folk like Duane Strosaker who I co-ran a 'Ride the Tides' workshop with on the Friday. Duane favours Greenland style blades but is as happy with contemporary 'BCU' paddle techniques. In 2010, he crossed to all 23 Southern California offshore oil rigs to raise awareness of them, and survived a great white shark attack in the process! Dan Arbuckle made for great company also as our safety boater as we paddled that day first to Racoon Strait by Angel Island and then to Yellow Bluffs to find some tidal action for the participants to play in. After a good day on the water, everyone rounded off with the P & H sponsored party at the Presido Yacht Club where the South City Blues Band played well into the night. 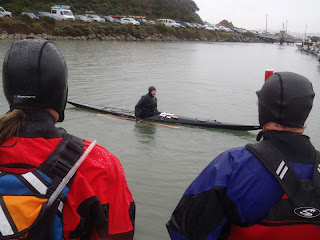 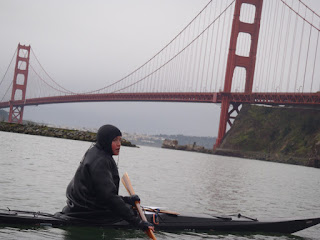 Saturday had me team up with Duane again and the superb force of nature that is Helen Wilson for 'Fun, Balance, Games & Rolling' in Horseshoe Cove. Helen lives in Arcata, California and has gained renown for her Greenland paddling skills using traditional equipment. Most noteworthy, in what may be perceived as a relatively short paddling career, are her successes from competing in the Greenland National Kayaking Championship in Qaqortoq 2008 and Nuuk 2010, in which she has gained four medals in five disciplines. 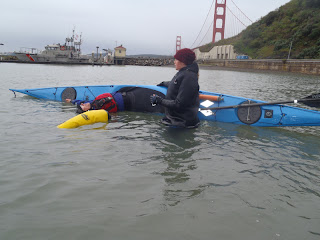 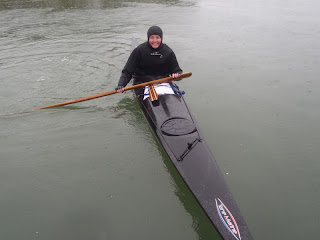 However, accolades aside, what impressed me about Helen was her clear, calm manner when teaching and her abundant joy for sea kayaking regardless of craft or blade style. She regards herself as a relative novice when it comes to coaching but Helen's innovative and enthusiastic style strikes an obvious cord with her students. It is so refreshing to come across someone who has a natural capacity to help others learn, without having gone through some formal indoctrination and certification process. Certainly, her approach to teaching and her mastery of the various traditional rolling techniques puts Helen in a unique position to help other improve what they do. This is nowhere more obvious than the superb 'Simplifying the Roll' DVD that Helen has produced and come highly recommended. 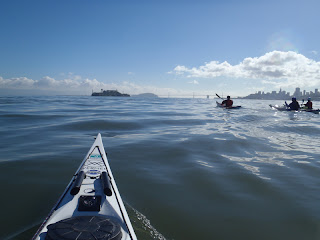 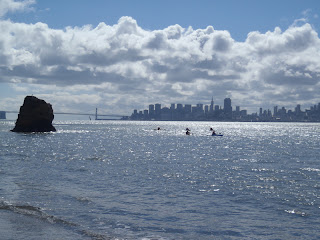 Saturday evening was spent relaxing in convivial company at the Marin Headlands Hostel where most of the attendees and coaches where staying. There was a chance to try a hand (and body) at Inuit rope games courtesy of Duane and Helen, before listening to a number of entertaining presentations. The night was brought to a close by Eric Soares, Commander and co-founder of the legendary Tsunami Rangers giving the key-note speaker talk entitled “Tsunami Rangers Retrospective”. A talk that was an intense thrill ride in itself! So when Sunday dawned, it was with great relief it brought about a change in the weather conditions. Having endured rain, hail, wind and almost snow, though there was a covering on Mt Tamalpais, it was nice to see sunshine and feel warmth again. Especially as on this day I was teamed up with the equally bright Marcé Wise along with Reg Lake and Tom Reilly as we set of with a team to ride more tides but this time around Alcatraz and Angel Island. When paddling with Marcé expect some glamour on the water as she brings with her a sunny smile, pink dry-top, purple kayak and matching fingernails. She is handy on a wave too! 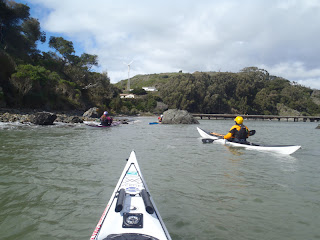 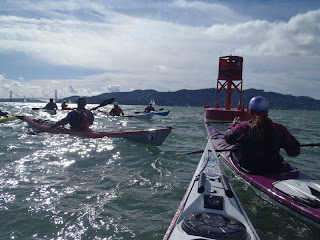 Once again, it was a wonderful experience to be a guest coach and a privilege to be part of such a great symposium. Special thanks go to Helen Wilson for providing me with fresh insights into Greenland style paddling as well as our discussions about the inspirational and therapeutic dimensions of sea kayaking. Bob Burnett, professional kayaker and social catalyst, for providing me with an Xcite HC to use and guidance throughout. Ed Hand, Rob Avery, Tom Bergh and Reg Lake for their wisdom and kindness. My sponsors Kokatat for providing me with new Ronin Pro for the season ahead, as well as some solid paddling shoes. And by no means least, all the folk I got to share time with on the water during GGSK '11, some very cool people indeed. 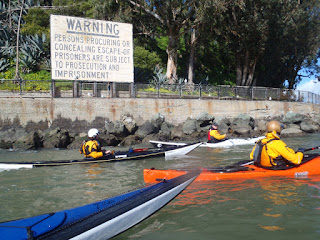 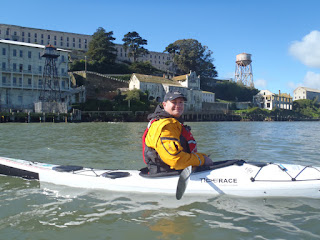