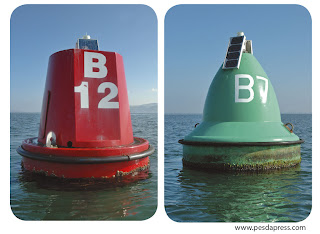 A lateral buoy, lateral post or lateral mark, as defined by the International Association of Lighthouse Authorities, is a sea mark used in maritime pilotage to indicate the edge of a channel.

A vessel heading in the direction of buoyage (eg into a harbour) and wishing to keep in the main channel should:

* keep port marks to its port (left), and

* keep starboard marks to its right.

For historical reasons, two different schemes are in use worldwide, differing in their use of colour.
Previously there had been 30 different buoyage systems, prior to IALA introducing the rationalised system.

The IALA defines them as System A and System B:

* System A is used by nations in Europe, Australia, New Zealand, parts of Africa and most of Asia other than the Philippines, Japan and Korea.

* System B is used by nations in North America, Central America and South America, the Philippines, Japan and Korea 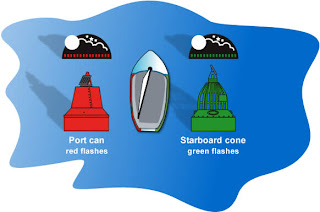