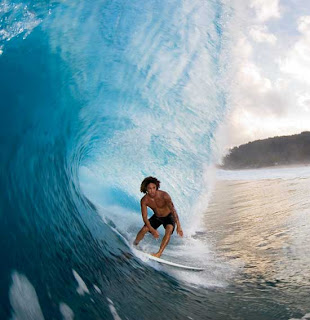 This cover shot was taken right before one of the contests.........It's pretty tricky swimming with a flash at that size because the water-housing is really large. I got caught by a few 2nd Reef cleanup sets. All of a sudden one swung wide and... Keali'i, who is Garret McNamara's tow partner, dropped in with all the boys hooting, stalled, the wave heaved, and I took this photo, barely making it through. I'm sure he's heard it a million times, but he looks like a young Buttons; his style and personality is just loaded with soul

- Ben DeCamp -
Keali'i Mamala, a core Hawaiian surfer, eyes the future of his oft-invaded territory from behind the curtain at Backdoor.
Posted by Sea Kayak Mark at 6:34 AM