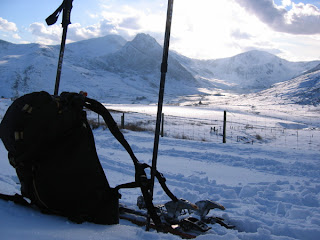 Backcountry skiing" is a term that is familiar to almost every skier, yet "ski mountaineering" remains a bit of a mystery to many. Simply stated, ski mountaineering is the use of skis for ascending and descending mountains. The "skis" used could be either specialised ski mountaineering gear (alpine touring / randonee), standard downhill skiing gear, telemark gear (free-heel nordic), very-short figle skis, or even snowboards. In the purest form of ski mountaineering, both the ascent and descent of a peak are made entirely on skis, using climbing skins and perhaps ski crampons for traction on the ascent, and then descending a continuous ski route back down to the base. At times a complete ski ascent is not possible due to snow conditions, route selection, or equipment choice, thus requiring some climbing on foot, perhaps using crampons or snowshoes. In other cases, a continuous ski descent may be dangerous or impossible, requiring downclimbing or abseiling past the areas of difficulty. The goal of ski mountaineering is to use skis to enhance the overall mountaineering experience by increasing speed, efficiency, and (most of all) enjoyment in the mountains. 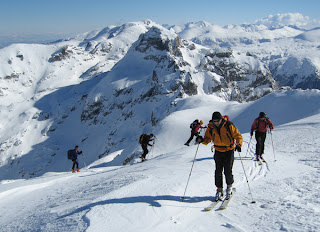 In contrast, backcountry skiing usually refers to skiing for its own sake, trying to find the best ski conditions and terrain regardless of the particular mountains where it occurs. Although the ascent and descent techniques are the same, the goals of ski mountaineering trips and backcountry skiing trips are usually different. Backcountry ski trips typically involve yo-yoing a single slope several times in one day once the good snow has been found, while ski mountaineering trips typically consist of a single focused ascent or traverse each day. Most ski mountaineers do either style of trip depending on which is appropriate for the conditions and the season. 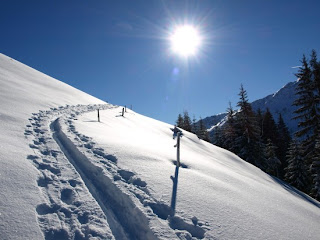