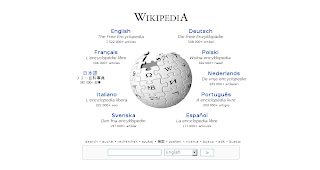 Where do you turn to these days when looking for some illusive bit of information or just want to get the low down of an old pop group you used to like in the '80's? That superb web based resource know to most as Wikipedia , of course.
More often than not I drop by Wikipedia and therein can be found the much coverted answers (as long as someone has taken the time to create an entry). If you are prepared to accept the the knowledge available isn't definitive or entirely accurate (as the idea of a wiki is that nayone can edit it and not everything wriiten can be guaranteed 100% true or correct) then Wikipedia is goldmine.
Wikipedia, naturally, has useful facts and figures about itself........As of August 14 2007, Wikipedia had approximately 7.9 million articles in 253 languages, 1.95 million of which are in the English edition. It has been written collaboratively by volunteers around the world and the vast majority of its articles can be edited by anyone with access to the Internet. Steadily rising in popularity since its inception, it currently ranks among the top ten most-visited websites worldwide. Wikipedia's name is a portmanteau of the words wiki (a type of collaborative website) and encyclopedia.
There are flaws, as with any innovative system, but for me the pros outway the cons. Every day, almost, I discover something new and have even added to a few pages. I just think its great that in 21st Century that we can all begin to more freely share we individually know and this can be accessed by many all over the world. Here to a great knowledge transfer medium.