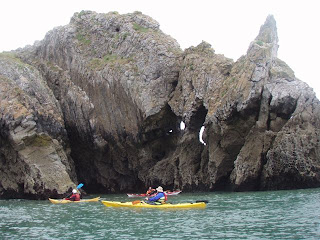 The Stackpole Sea Kayak Festival is a now well established event with a difference in that the theme of ‘paddling lightly’, like ‘treading softly’ on the land, is the underpinning ethos rather than that of skills development. The symposium runs every other year and this was the fourth event of its kind and my third appearance as a guest leader. 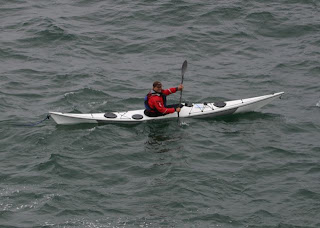 The emphasis of the festival has always been about looking after the wonderful coastline that is Pembrokeshire whilst exploring and discovering its natural wonders. With over 70 attendees, the National Trust’s residential centre at Stackpole was a lively hub of activity. 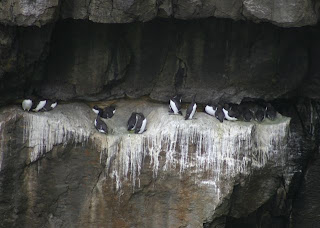 As with all such occasions, the weather plays a large part in what can be achieved and from the outset groups were face with interesting conditions. The first day included a trip around Stackpole Head via Church Rock and Broad Haven to St Govan's Head, having set off from Stackpole Quay. With moderate swell and Force 5 winds it gave everyone a chance to see Pembroke at its wild best without being overwhelmed. 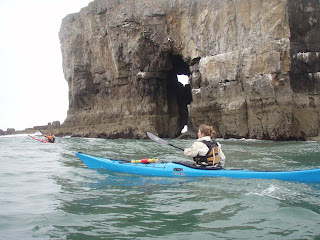 A number of social events where organised to keep everyone enthralled and entertained in the evenings including a wildlife talk from bird expert Bob Haycock and presentations about sea kayak adventures, both local and afar by renowned experts Nige Robinson and Olly Sanders. Other highlights included the famous Stackpole BBQ which is always plentiful and delicious followed by a ceilidh for those still with enough energy to throw themselves around on the dance floor. 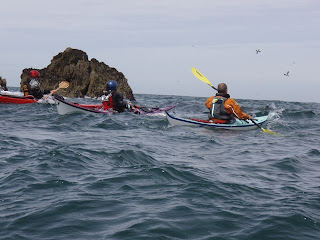 The highlight of the weekend for me was a circumnavigation of Skomer Island. This fifteen kilometre trip includes the chance to observe an abundance of bird life (for example, Manx Shearwaters and Puffins), the negotiation of strong tidal flows as well as a feeling of exposure, especially along the west coast. When launching  from Martin’s Haven, there is a sense of satisfaction bypassing the queues of tourists taking the boat trip. However, the journey requires careful planning as challenges occur at the very start where a ferry glide is required to cross Jack Sound with its intimidating tidal race. 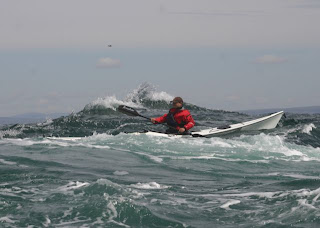 We were fortunate on this trip to be joined by Chris Taylor, who is the Warden for Skomer and who has recently taken up sea kayaking as an interest. Despite his growing knowledge of the water around the island Chris, along with all the paddlers in the group, were particular taken by the tide race running from the Garland Stone. With effort and careful paddling in confused waters, everyone was pleased to pass the Mew Stone and rest in South Haven before finishing with a surf in Little Sound before heading home. 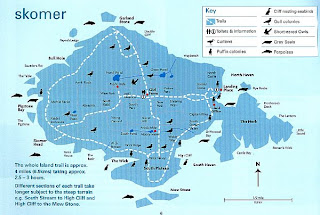 The final day of the main event was spent circumnavigating Caldey Island, which is a pleasant trip at the best of times. On this occasion the group launched from Tenby and after rounding the island, landed at Lydstep. An feature about Caldey is that it has been inhabited since the Stone Age, and has been home to various orders of monks since Celtic times. It is now owned by monks of the Cistercian Order. 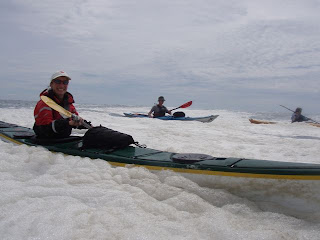 Before leaving Pembroke, I ran a 3* Sea training day for some of the staff from Stackpole and a couple of guests. David Leathborough also joined us on the water to do some filming.  David, through his business Focused on Adventure, has been commissioned  by the British Canoe Union to produce a series of videos that will set out the standards of what is expected at 3* and 4* across all the paddling disciplines. So keep an eye out for them in the autumn. 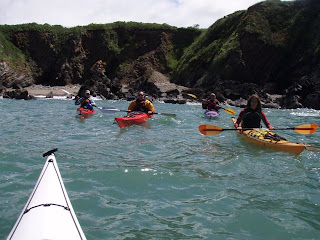 Overall, the group had a pleasant time paddling out of West Angle with surfing, rock hopping, rescues and rolling thrown in along with other aspects of the 3* syllabus. Perhaps even one of two movie stars in the making as well!
As for me, Pembroke is not a place I visit frequently so being invited down to be a guest coach is a much a busman's holiday as anything and a very enjoyable one at that. And as one might expect, both my Tiderace Xcite and Kokatat paddling gear served me well throughout.
Posted by Sea Kayak Mark at 7:25 AM